We gave everyone Fridays off – here’s what happened

The idea of a 4-day week has been gaining momentum in workplaces all over the world for a number of years. The pandemic didn’t give rise to the idea, it simply fast-tracked our adaptability and encouraged us – often through necessity – to challenge the status quo.

With around half of our employees based abroad and others working remotely, we decided to take our flexible working model to the next level.

We had been closely following the 4 Day Week campaign for a while, so when being in a state of disruption became a common and regular occurrence, we decided it would be a good time to experiment with a 4-day week at EyeQuant for a quarter.

We’ve always tried to cultivate a culture of experimentation and, as with all of our experiments, the value isn’t in the end result but in the things you learn along the way. And there was a lot we were curious to learn during this experiment.

Would employees be happier with an extra day off? Would they be more productive? Or would the shorter working week increase stress, reducing employee satisfaction and productivity?

The key to finding the answers was to be completely transparent and to communicate clearly – and often – with our employees. The most important thing here was to make sure that this was two-way communication. After all – the whole point was to give employees a better work-life balance and to make them happier.

We spent some time talking with our staff. We asked them what kind of support they would need to shift to a 4-day week. We explained our motivations, exchanged ideas, listened to their concerns and updated our plan accordingly. This was achieved through a series of 1-2-1 and group meetings.

What we thought would happen 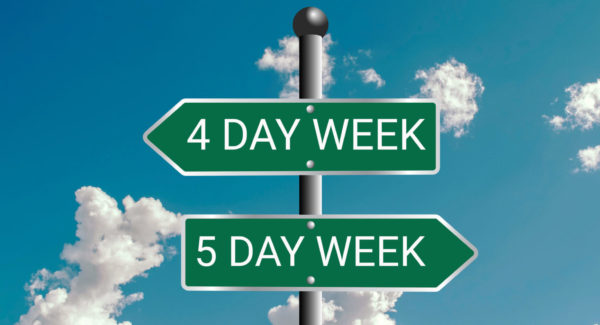 In a nutshell, we thought everyone would love the new arrangement. Working less (all employees’ hours were reduced to 32 per week) for the same pay – who wouldn’t want that? Of course, our motivations for trying this in the first place ran far deeper than merely offering the same pay in exchange for fewer hours of work.

We thought that compressing the week into four days would encourage people to work more efficiently. We thought it would lead them to plan their work more autonomously, giving them a greater sense of ownership and more control over their working lives.

More importantly, our biggest hope – and arguably the strongest argument for the 4-day week – was that the new arrangement would improve our employees’ work/life balance. Work practices aside, we were convinced that giving people an extra day off would improve their physical and mental wellbeing.

We were happy to be proven wrong, but we made sure that we had a concrete plan for capturing as much valuable feedback as possible to inform future experiments.

How we brought our plan to life

The onus on planning their week fell on to each employee – that was part of the deal, and one of the by-products of placing your trust in your staff. We wanted to give employees the chance to help design a company that they would be proud of by giving ownership to them.

What we did, however, was put in place some new standards for how we operate, aimed at increasing efficiency and productivity.

One of the biggest time drains in our workplace, and of course many workplaces, is meetings. We’ve all experienced it – a calendar full of back-to-back meetings, with little time to get any work done.

So we made a point of reducing meetings. As a team, we called up all recurring meetings to see which ones could be cancelled (if they no longer provided enough value), combined with other meetings, made less frequent or simply included as an agenda item elsewhere. We also prioritised who should attend.

Believing that meetings expand to fill the time allotted for them (Parkinson’s Law), we reduced the standard length by up 50% (why are 1-hour meetings the default?) to ensure attendees stay focused and on track. Our finance meeting, which previously ran for 1.5 hours now just takes 15 minutes per week, achieved through a well prepared and repeatable agenda.

We devised a meeting protocol for all employees to shape and guide more efficient and collaborative meetings:

As a result of the above, we reduced from approx 6 hours of company meetings a week to one hour (where everyone is involved) and 2 hours where some people are involved. This has given us a huge amount of productive time back.

We asked all of our employees to block out focus time. During this time, they were not expected to attend meetings and were only to be disturbed if something was genuinely urgent. We decided:

What we learned from the trial

At the end of the trial, we did comprehensive interviews with our employees to learn about their experiences. We had, of course, pre-warned them that this was part of the process, so they were generally very well prepared to provide feedback regarding health, wellness and productivity.

As we predicted, most people reported an improvement in their work/life balance.

“I enjoyed the 4-day week as it gave me time to focus on personal things; my family and my hobbies. I found it vastly improved my personal life.”

Most people felt as though they became more productive, especially as the number of meetings had reduced.

“The short week came with fewer meetings (or at least with less time spent in meetings), so I had more uninterrupted time to work. I was very productive during the week, and having 3 consecutive days to rest is very effective as well.”

Our staff responded really positively to being given the freedom to work their own way.

“The 4-day week shows the company places trust in us and allows us to make the days work for us.”

Not all the feedback was positive. Some people expressed the view that having less time to complete the same amount of work added pressure and stress to their work environment.

“As our end-of-week progress reports were moved to a Thursday, I felt I had more to complete in a shorter amount of time. There was a lot of pressure, and I ended up working on a few Fridays.”

Some staff came across the same challenge as a result of other companies working a traditional 5-day week.

“As not all companies are working a 4-day week, we sometimes had to work on Fridays if something couldn’t wait until Monday.”

A conduit for change

While the feedback from our employees was generally positive, it was a mixed bag, with some very valid arguments raised against changing to a 4-day week.

Whether people supported the new approach or not, they generally agreed on certain elements of the new environment, which were actually more important to them than the number of days worked. For example, our staff relished the autonomy of being in control of their schedules and appreciated the effort to make the time spent in meetings more productive. These changes have now become common practice with, on average, employees having 30% fewer meetings per week resulting in up to 5 hours saved that can be spent elsewhere.

For now, we’ve gone back to a 5-day week as standard but have given all employees the choice as to whether they work on Fridays. If they’ve completed their work and feel it would be beneficial for them to take a 3-day weekend, we’re supportive of that.

We’ve also documented all of the lessons learned for when we come back to this again and created some new processes designed to facilitate a more efficient week for everyone.

We’ve learned that, in a post-pandemic world, keeping an open mind and offering flexible working options is key to a successful working environment, so rather than replacing one rigid system with another, we’re open to ways of work that suit individual needs.

Charlie is the CEO of EyeQuant with more than 20 years’ experience in establishing and leading high-growth tech companies. He ran the Internet Banking redesign program for Lloyds Banking Group and, most recently, was Chief Product Officer at Findmypast. He is passionate about data, design but not Golf...